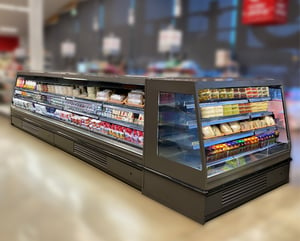 There’s a lot of buzz around self-contained refrigeration units — and for good reason. Not only are they easier to install and maintain than traditional remote units, but they are also far more energy-efficient and mobile. (More on those benefits in this blog post.)


As self-contained refrigeration units begin to appear in more stores, restaurants and cafeterias, new trends have emerged in this segment of commercial refrigeration. Take a look.

The Push to Go Green

In 2020, the Environmental Protection Agency (EPA) estimated that commercial refrigeration equipment would account for about 26% of global hydrofluorocarbon (HFC) emissions. While these greenhouse gases enable the refrigeration cycle, they are also known to have a high global warming potential (GWP). In fact, HFCs can have GWPs that are hundreds or thousands of times more impactful per pound than carbon dioxide (CO2).

Traditionally, the thought was that if a commercial refrigeration display had a door on it, it would be more efficient — the idea being the closed door would trap the cool air inside. That mindset, though, has changed. Whereas workers and customers can leave the doors of closed displays ajar and cause energy to be wasted, open refrigerated displays prevent this issue — and with the right controls in place, continue to deliver energy efficiency throughout the operation.

(It's also worth mentioning that opening refrigerator doors takes time, and customers may have to go through this motion multiple times if the item they want is not behind that initial door. As a result, many shoppers prefer open cases to the traditional grab-and-go setups.)

Let’s use the example of Pure Cold again. To maximize energy efficiency of its open-case, self-contained refrigeration units, Pure Cold leverages shelf-edge technology to form a barrier. Designed to ensure that cool air circulates inside the display case, this technology can reduce refrigeration energy use by up to 25% while also minimizing food spoilage, decreasing cold air spill and removing physical barriers between the customer and the product. Collectively, these factors translate into a better customer experience and increased sales.

We’re used to seeing aisles of refrigerated fixtures in grocery and convenience stores. While these rows of fixtures remain, they’re often supplemented by what’s known as on-the-spot refrigerated displays. Whether used to promote holiday coffee creamers around Christmas or a variety of dips to choose from for Super Bowl Sunday, these types of self-contained refrigeration units can increase sales around different times of the year.

The setup of an on-the-spot refrigerated display is as easy as its takedown. Outfitted with castors (which are raised after placement to combine multiple fixtures in a seamless line-up) and requiring only a plug-in connection to operate, Pure Cold self-contained fixtures can be quickly weaved into existing infrastructure and relocated elsewhere with ease. So when a promotion ends or the layout of a commercial space needs to change, the solution is simple.

At Pro HVAC/R, we believe in providing customers with the highest quality of commercial refrigeration fixtures. That’s why we install and maintain Pure Cold products — a brand recognized for its innovative designs and state-of-the-art performance. To learn more about the fixtures and our services, get in touch with the Pro HVAC/R team today.